The Fisherman & The Mermaid 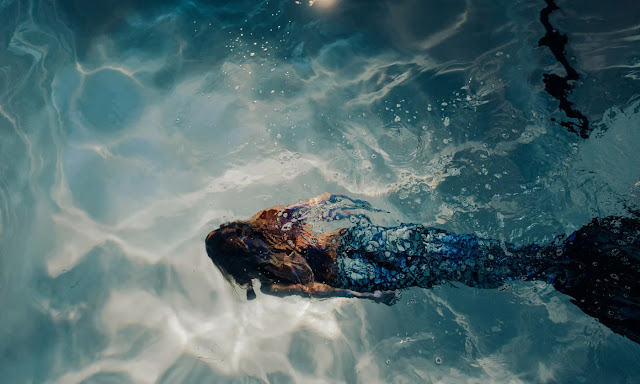 STORYTIME: THE FISHERMAN & THE MERMAID

Gather round for a story about a would-be fisherman, his mermaid bride, and the enchanted fish hook that brought them together...

Once upon a time, there were two princes. Of the two men, Hoori was the great hunter, and Hoderi, the famous fisherman. Rain or shine, Hoderi always returned home with fish, and Hoori, the greatest marksman to walk the earth, ensured that no villager went hungry. But, despite Hoori’s prowess amongst huntsmen, he longed to be like his brother. He too desired to snag something extravagant from the sea, so Hoori asked Hoderi to borrow his boat and lucky fishing hook. But after an entire day spent casting and praying for a bite, Hoori went home empty-handed. Even worse, he’d lost his brother’s lucky hook.

Hoderi was angry with his brother. He threatened to take Hoori’s horse and bow if he didn’t find and return his hook. Knowing that he could not hunt without his lucky charms, Hoori dove to the bottom of the sea. He swam and searched but found no hook, just a curious mermaid named Toyotama. Her name meant ‘beautiful jewel,’ and she was the sea god’s daughter. Although Hoori had not found what he’d been hunting for, he’d discovered something mightier than steel or bow – he found love. Hoori and Toyotama made a home beneath the waves, and for a few years, he thought of nothing but his desire for the sea god’s daughter.

But after three years of living in underwater bliss, Hoori began to miss his royal life on land. Sensing the young man’s discontent, the sea god went to Hoori and bid him farewell. As a parting gift, he retrieved the missing hook from his pocket and handed it to the prince.

Once Hoori returned the hook to his brother, the prince decided to build a new home for Toyotama. The mermaid was pregnant with their son and had requested a cozy, secluded room to usher in new life. Unlike other princesses, Toyotama did not concern herself with trivial demands like silk bedsheets or dressing gowns embroidered with gold thread. She only asked that Hoori make himself scarce during their son’s birth.

Women often labored alongside other women, so Hoori was not surprised by her request for privacy. However, on the day their son was born, he could not resist the temptation to peek into her bedchambers. When Hoori spied on Toyotama, he discovered that she was not a mermaid, nor was she a human – she was a dragon.

Devastated by her husband’s betrayal, Toyotama knew the cure for a broken heart could only be found in the sea. She left their newborn in Hoori’s care and returned to her underwater lair. Legend says that the child grew up to be a fine hunter, fisherman, and eventually, father to Japan’s first emperor, Jimmu Tenno.

Posted by Lady Caer Morganna at 9:49 PM No comments: 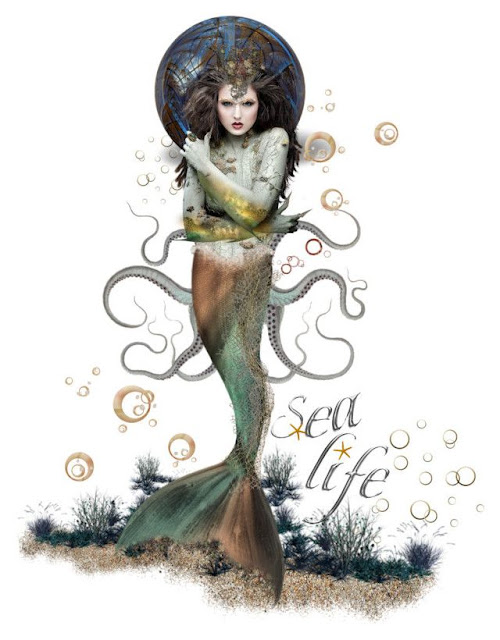 THE FIRST MERMAID IS ALSO CALLED GODDESS OF THE SEA:

In Ancient Roman times, Atargatis was was beautiful and powerful priestess who fell in love with a human shepherd boy. He, being simply mortal, did not survive her divine love-making. She became pregnant with his baby and soon became distraught and remorseful. After the birth of a baby girl, Semiranus on the shore, she threw herself into the ocean to drown. Her beauty was so great that the gods did not let her die, but changed her into a mermaid. Not only did she become a mermaid, but a goddess of the seas. Half woman and half fish. Atargatis was depicted as having long, flowing hair like the water. She is THE FIRST mermaid.

GREAT MOTHER AND GODDESS OF FERTILITY AND WATER:

History - during the Roman Era, she was worshiped at the shrine in Hierapolis and had multiple temples dedicated to her. At her temples were ponds containing her sacred fish that only her priests were allowed to touch. Supposedly the fish knew their own names and would come when called. They even wore jewels and would snuggle up to people like a pet. In her day, worshipers would immerse themselves in her sacred waters to offer praise.

Posted by Lady Caer Morganna at 3:25 PM No comments: 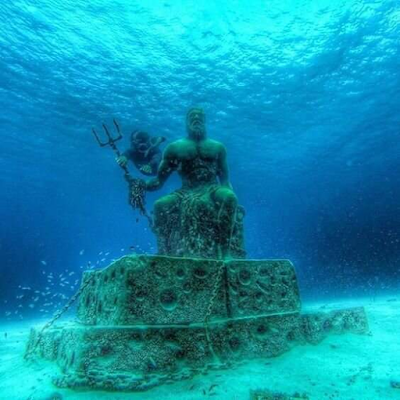 The underwater statue of the Greek God Neptune. It was made by the artist Mario Hoyos in 2012 off the coast of the Caribbean island of San Andreas. Colombia.
Posted by Lady Caer Morganna at 9:23 AM No comments: 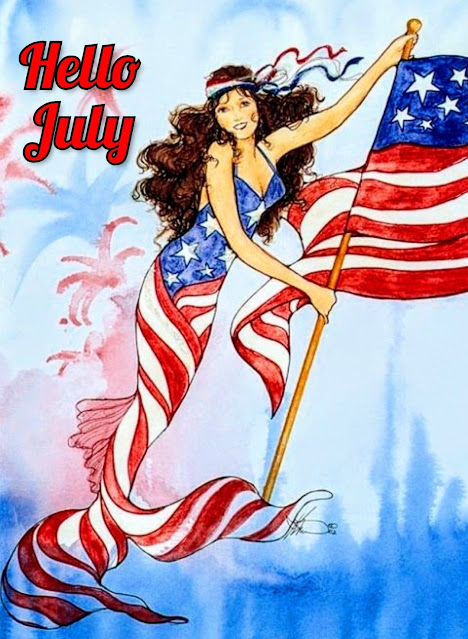 Posted by Lady Caer Morganna at 8:57 PM No comments:

Email ThisBlogThis!Share to TwitterShare to FacebookShare to Pinterest
Labels: mermaids 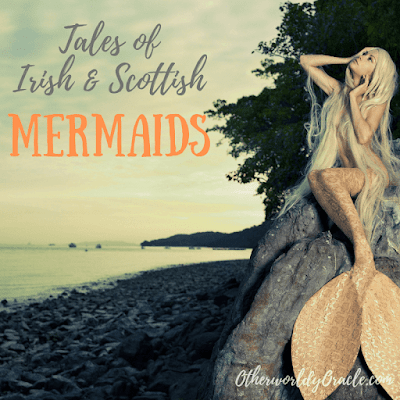 The Merrow, or if you write it in Irish, Moruadh or Murrughach, from muir (sea) and oigh (a maid), is not uncommon they say on the wilder coasts. The fishermen do not like to see them for it always means coming gales. 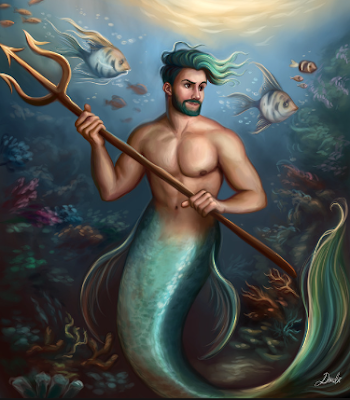 The male Merrows (yes, they do exist depending upon which legends you read) usually have green teeth, green hair, pig's eyes, red noses, and duck-like scales between their fingers. 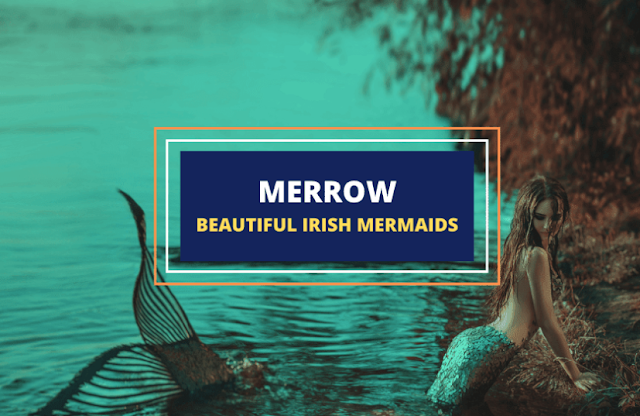 Sometimes they prefer good-looking fishermen to their sea lovers. Near Bantry in the last century, there is said to have been a woman covered all over with scales like a fish who was descended from such a marriage. Sometimes they come out of the sea and wander about the shore in the shape of little hornless cows.

Whatever we choose to call them, the merrows are usually described as incredibly beautiful maidens with long green hair, and flat feet with webbed fingers and toes for better swimming. The merrows sing seductively, just like Greek sirens. However, unlike the sirens, the merrow don’t do this to tempt sailors to their doom. They’re not as malevolent as the sirens. Instead, they usually take sailors and fishermen to live with them underwater, entranced to love, follow, and obey the merrow’s every wish.

Posted by Lady Caer Morganna at 3:05 PM No comments:

Email ThisBlogThis!Share to TwitterShare to FacebookShare to Pinterest
Labels: The Mermaid Chronicles - Part Four: The Merrow

The Mermaid Chronicles - Part Five: Dive into the Realm of Merfolk! 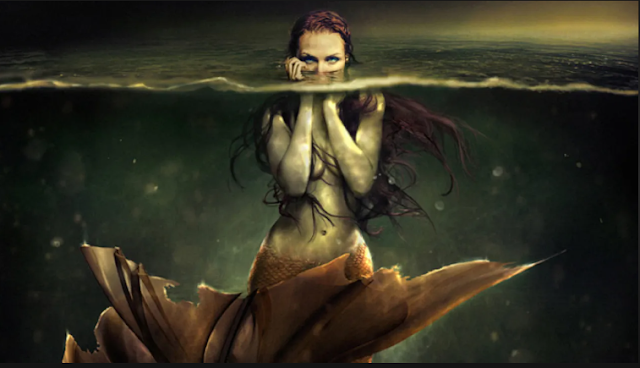 Who and what are the Merfolk? Merfolk are legendary water-dwelling human-like beings. They are attested in folklore and mythology throughout the ages in various parts of the world. Female merfolk may be referred to as mermaids, although in a strict sense mermaids are confined to beings who are half-woman and half-fish in appearance. Male merfolk are called mermen. 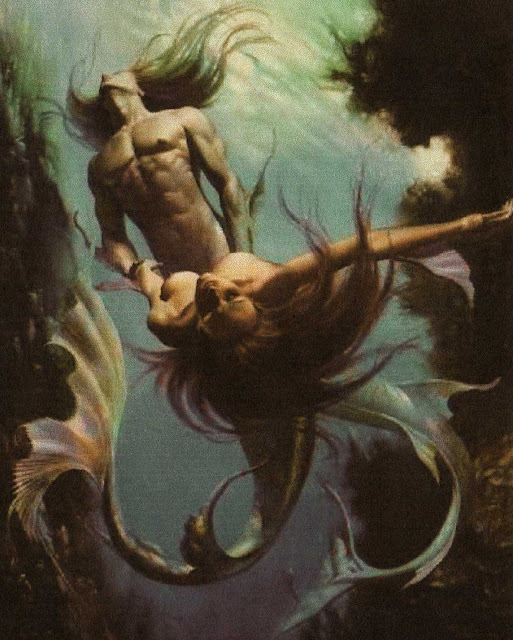 So, why do Merfolk appeal to us? This, of course, is the real question, isn't it? WHY are we so intrigued by Mermaids and Mermen? Merfolk appear in the mythology of every land and throughout history. Yet, people doubt their existence. "Mers" have a water-sensate appeal which may well go back to the emergence of the mammal from the sea. If we indeed came from the sea, the merfolk may be a sort of missing link between sea and land creatures. Even though we consider merfolk as myths, the half mammal-half fish form does appear in nature, as in seals which combine both sea and land characteristics. Furthermore, human blood is nearly half salt water and the human body is mainly fluid in content. Perhaps it is fair to say that we are, in fact, the first cousins of the legendary mers. 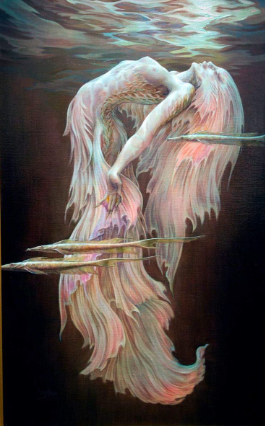 Posted by Lady Caer Morganna at 2:40 PM No comments:

Email ThisBlogThis!Share to TwitterShare to FacebookShare to Pinterest
Labels: merfolk, mermaids, mermen, The Mermaid Chronicles - Part Five: Dive into the Realm of Merfolk!

Posted by Lady Caer Morganna at 12:11 PM No comments: 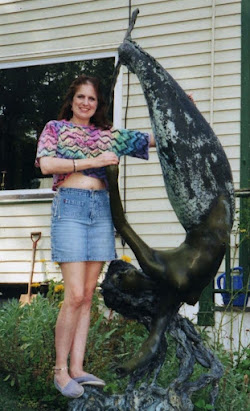 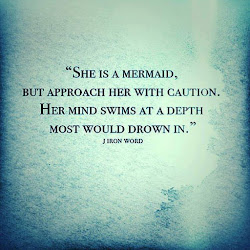 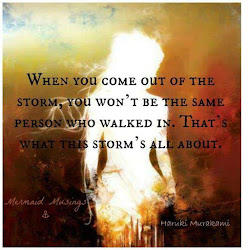 This blog is dedicated to my sweet girl, Miss Haley 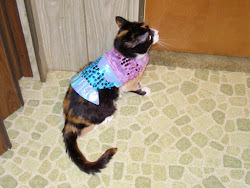 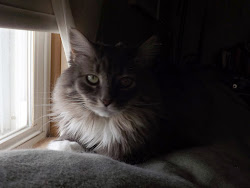